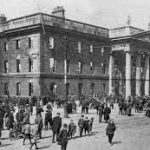 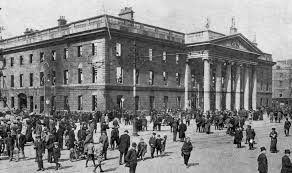 The GPO in the aftermath of the 1916 Rising (Dublin City Public Libraries).

On Tuesday 13 May 2014 Mr Jimmy Deenihan TD, Minister for Arts, Heritage and the Gaeltacht, has jointly announced a €22 million investment in a range of major national commemoration projects in 2015. This funding forms part of an exchequer investment of €200 million unveiled by the Minister for Public Expenditure and Reform, Mr Brendan Howlin TD. This overall fund will assist new projects in a wide range of areas and will support employment across the country. The projects will be funded from the proceeds of the sale of state assets.

The commemorative projects to be funded in 2015 include major developments at GPO, National Archives, National Concert Hall, Kilmainham Courthouse and Gaol, the Military Archives, and Richmond Barracks where the leaders of 1916 Rising were held after their surrender. The social history of the period will be addressed by the development of a ‘Tenement Museum’ in 14 Henrietta Street, to fully explore the reality of tenement life in North Inner City Dublin in the era of the 1913 Lockout.

Speaking today alongside Minister Howlin at the GPO, Minister Deenihan welcomed the funding allocated to projects under the auspices of his Department: ‘As Minister for Arts, Heritage and the Gaeltacht – and as Chairman of the Commemoration and Decade of Centenaries Programme – I am delighted to be here with Minister Howlin as we announce this significant funding for 2015. The social and political developments of the decade from 1912 helped to form modern Ireland. We are commemorating these momentous events, and the people so closely associated with them, especially in the lead in to the centenary of the Easter Rising of 1916. This funding for 2015 is extremely important in our preparation for that major centenary’.

A sum of €22m will be provided towards the suite of commemorations projects. This will help to fund the 2015 costs associated with six flagship projects:

1. GPO Interpretive Centre: This project will see the construction of an extended exhibition and interpretive centre at the O’Connell Street landmark housing a permanent exhibition of the 1916 Easter Rising.

2. Kilmainham Courthouse and Gaol: This project entails the adaptation by the Office of Public Works of the former courthouse building for use as a new visitor facility for Kilmainham Gaol.

3. Military Archives: The existing premises at Cathal Brugha Barracks are to be refurbished to provide front-of-house facilities for visitors to the archive, and for a state of the art storage facility for the Military Pensions Archive.

4. Teach an Phiarsaigh, Ros Muc: The project envisages the development of a new visitor centre at Patrick Pearse’s cottage in County Galway.

5. Tenement Museum: This will see the development of 14 Henrietta Street as a centre for the exploration of tenement life in North Inner City Dublin.

6. Richmond Barracks: This will involve the refurbishment of the remaining barracks, where the leaders of the 1916 Rising were held after their surrender, as a cultural, educational, training, heritage, tourist and community facility.

The 2015 funding will also support a number of additional projects, which form part of the commemorations programme:

1. Redevelopment works at the National Concert Hall: This entails the development of the recital rooms – including the Kevin Barry Room, where the Treaty Debates took place – as well as ancillary works to the foyer and front of house facilities.

2. National Archives of Ireland Project (Phase 1): The project will entail the redevelopment of the National Archives at its Bishop Street HQ to provide state of the art exhibition and storage facilities in three phases up to 2020.

3. Yeats 2015: This will be a celebration of Irish culture during 2015, marking the 150th anniversary of the birth of WB Yeats. The year-long programme will include a range of genres: poetry, literature, drama, music, fine art and craft.

4. The Irish Parliamentary Party Monument: This will entail restoration work to the burial vault of John Redmond, the politician and statesman, who died in 1918.