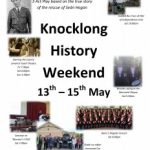 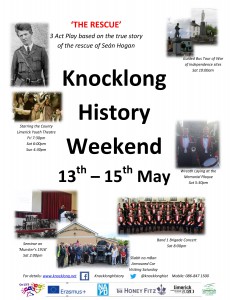 From Friday 13 to Sunday 15 May the Knocklong History Weekend took place in Knocklong, Co. Limerick. The rescue of the Tipperary IRA Volunteer Seán Hogan at Knocklong on 13 May 1919 was a sequel to the Soloheadbeg ambush, generally recognised as the first engagement in the Irish War of Independence. Hogan had participated in the Soloheadbeg attack, along with Dan Breen, Sean Treacy and others. He was captured afterwards, and was rescued from RIC custody at Knocklong by Breen and Treacy, who attacked the train carrying Hogan to Dublin, killing two members of the RIC in the process. The rescue precipitated the imposition of martial law by the British authorities in Co. Tipperary.

This year’s event consisted of lectures, tours, re-enactments, debates, and dramatic performances, with a particular focus on the impact of the Easter Rising in Munster.

Post Views: 52
Posted in 2016 events, Artistic and Cultural, Easter Rising, Events in May 2016, Exhibitions, Munster, Past