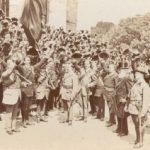 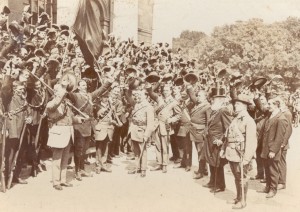 On Friday 13 and Saturday 14 November Waterford Treasures hosted a ‘1916 Roadshow’ as part of the preparations for a permanent exhibition to commemorate the 1916 Rising. They were particularly interested in hearing from relatives of members of the following organisations in Waterford prior to 1922: Conradh na Gaeilge (the Gaelic League); Sinn Féin; Cumann na mBan; Na Fianna Éireann; the Irish Volunteers; the Irish Republican Brotherhood; the Irish Republican Army; and the GAA.

Waterford Treasures appealed to the people of Waterford to consider donating or loaning items for possible inclusion in this permanent exhibition in the Bishop’s Palace. Artefacts of interest include including medals, military equipment, original photographs, letters, postcards, diaries, flags, and official documents. Members of the public with historic objects from this period that they would like to donate or loan to the museum were encouraged to bring them to Waterford Treasures (Medieval Museum) on Friday 13, from 10am to 4pm, and Saturday 14 Nov, from 10am to 1pm.

From the National Archives of Ireland: Waterford in the early twentieth century.