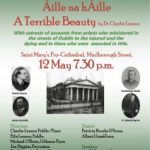 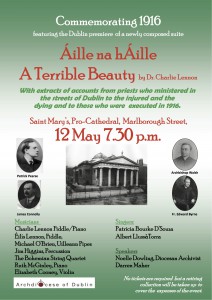 On Thursday 12 May 2016 the first performance in Dublin of Charlie Lennon’s Suite  A Terrible Beauty – Áille na hÁille, commissioned by Gael Linn for the 1916 centenary, took place in Saint Mary’s Pro-Cathedral, Marlborough Street on Thursday 12 May 2016 at 7:30pm. The event not only featured this newly composed work, but was accompanied by extracts from the accounts of priests who ministered in the streets of Dublin to the injured and the dying and to those who were executed in 1916.

The musicians were led by Charlie Lennon, the composer, and featured Éilís Lennon on fiddle, Michael O’Brien on uilleann Pipes, Jim Higgins on percussion, the Bohemian String Quartet, Ruth McGinley on piano, and Elizabeth Cooney on violin. The singers were Patricia Bourke d’Souza and Albert Llussa I Torra.

From RTÉ Archives: Leslie Bean de Barra (née Price) on bringing despatches from the GPO to the Pro-Cathedral in 1916.