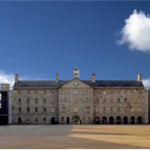 On Thursday 12 March 2015, Alex Turner, commander of the Irish Guards regiment, delivered a lecture in the Palatine Room of the National Museum of Ireland, Collins Barracks, to an audience of invited guests including Prince Richard, Duke of Gloucester and his son Alexander. The event was attended by the British ambassador, Dominick Chilcott, the Belgian ambassador, Philippe Roland, New Zealand Honorary Consul Alan McCarthy and Chairman of the Somme Association Alan McFarland. Mr Turner’s lecture described the evolving military tactics on the western front during World War One. He was able to bring his own military experience in Afghanistan to bear when considering the development of infantry combined actions with the military technology developed during the the war. Although he agreed that early battlefield tactics were rigid and inadequate, he argued that some British generals did embrace the opportunities offered by tanks, machine guns and aerial reconnaissance. He focussed on several battles in World War One including the Battles of Messines ridge where extensive mines were dug and set off to cause enormous explosions under German lines. Although these operations were successful, he argued that the follow-up consolidation of gains was too heavily weighted on the side of the defenders and little overall gain was won.

Prior to the lecture, a smaller group including the Prince were given a tour of the World War One exhibition in the Collins Barracks by curator Lar Joye and Raghnall O’Floinn, Director of the National Museum of Ireland. They also experienced the Pals production ongoing at Collins Barracks until the end of April 2015. Following the lecture a group including the Prince and General David O’Morchoe of the Royal British Legion went to the National War Memorial at Islandbridge, where the Prince signed the visitor’s book at the memorial before leaving for a guided tour of the State Apartments and Medieval Vault at Dublin Castle where he also signed the visitor’s book. Lastly he attended a reception of the Year of Design, meeting Shirley McCay, Director of Trade & Investment, UKTI and Laura Magaghy, Chairman of the Design & Crafts Council of Ireland 2015.

From the International encyclopedia of the First World War: the changing nature of warfare, 1914-1918.

Post Views: 83
Posted in 2015 events, Dublin, Events in March 2015, Ireland and the World, National Museum, Past, World War One