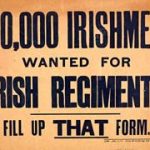 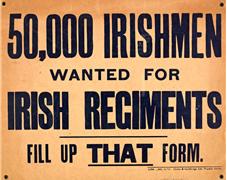 The National Library of Ireland, in partnership with Trinity College Dublin and RTÉ, organised a ‘World War One Roadshow’, held in TCD on Saturday 12 July. This featured a series of pop up talks and lectures on the Great War, and TCD’s own unique history during this period, along with facilities to catalogue and record memorabilia or stories related to the broader Irish involvement in the First World War.  There was also a range of other activities including history tours of the campus related to the Great War and the ‘Last Cricket Match of Peace’.  The day concluded with the final Bugle call of the ‘Last Post’.

Commenting on its significance for TCD prior to the event, Professor James Wickham said:  “The World War One Roadshow forms part of Trinity College Dublin’s engagement with the Decade of Commemorations.  With its programme of talks and lectures it will showcase research being conducted in Ireland on this period; it will also remember the over 450 Trinity College graduates who died in the Great War. We want it to be an informative and thought provoking day concerning Ireland’s part in World War One.  We want people to come away from it with a greater understanding of Ireland’s role in what was one of the bloodiest conflicts of our time’. 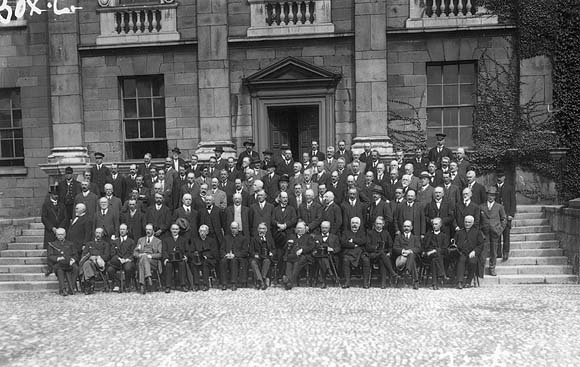 Members of the Irish Convention in TCD, 1917 (National Library of Ireland)

Members of the public were invited to bring memorabilia related to World War One to be catalogued, digitised, and uploaded to an online European archive. This archive is being developed by Europeana (Europe’s digital library, museum and archive), in conjunction with the University of Oxford and national partners across Europe, such as the National Library of Ireland, in time for the 100th anniversary of the outbreak of the war in 1914. It will be the first ever online European archive of private stories and documents from World War One. Experts from the National Library of Ireland and Trinity College Dublin were available to  evaluate and digitise the memorabilia presented on the day for the purpose of the archive. Members of the public with stories and memories related to the First World War were also encouraged to share them, as there were facilities for recording such stories on the day. Commenting in advance, Katherine McSharry, Head of Services with the National Library of Ireland, said that ‘the huge interest in the forthcoming 100-year anniversary of the outbreak of World War One reminds us how important it is to ensure physical memorabilia of key historical events, brought to life with people’s stories and memories, are recorded for posterity. The National Library of Ireland will manage a team of cataloguers from TCD and NUIG, supported by NLI staff, for the World War One Roadshow, who will work to record and digitise the stories and items brought in by members of the public.  We have been involved in similar events in the past, which have generated huge levels of interest. We know the Irish public has a wealth of items and stories to share in relation to World War 1, and we look forward to discovering more fascinating material during this event’.