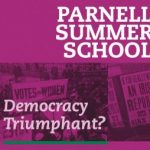 From 12-16 August 2018 the 2018 Parnell Summer School took place at Avondale House, Rathdrum, Co. Wicklow, on the theme of ‘Democracy triumphant?’ On 14 December 1918, Irish voters went to the polls in the first post-war general election across the United Kingdom. Amidst the aftermath of the war and the legacy of the Easter Rising of 1916, the election was contested under an enlarged franchise which included for the first time some women among its electorate. Using the centenary of the 1918 election as a starting point, the 2018 Parnell Summer School hosted a range of academics, writers and politicians to examine themes such as representative democracy, legitimacy, political thought and activism, international influences, and the role of women from a range of historical and contemporary perspectives. The summer school interrogated our democratic traditions and consider the challenges confronted in the past as well as those now emerging at a time of increasing political volatility.