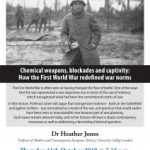 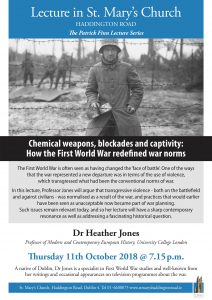 On Thursday 11 October 2018 St Mary’s Church, Haddington Road, Dublin 4, hosted a lecture by Heather Jones (UCL), entitled ‘Chemical weapons, blockades and captivity: How the First World War redefined war norms’ The First World War is often seen as having changed the ‘face of battle’. One of the ways that the war represented a new departure was in terms of the use of violence, which transgressed what had been the conventional norms of war. In this lecture, Professor Jones will argue that transgressive violence – both on the battlefi eld and against civilians – was normalised as a result of the war, and practices that would earlier have been seen as unacceptable now became part of war planning.

From the International encyclopedia of the First World War: Gas warfare.