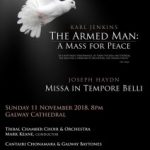 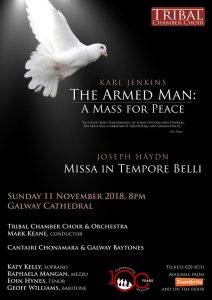 On 11 November 2018, to mark the centenary of the end of the First World War, a combined performance of Karl Jenkins’  The armed man and Joseph Haydn’s Missa in tempore belli (Mass in a time of war) took place in Galway Cathedral

The concert was performed by the Tribal Chamber Choir, with a full orchestra conducted by Mark Keane. Soloists will be Katy Kelly (soprano ), Raphaela Mangan (mezzo ), Eoin Hynes (tenor ), and Geoff Williams (baritone). A member of the Western Islamic Cultural Centre Galway will sing the ‘Adhan’ in The armed man. There was also be a guest performance by the Galway Baytones.

The armed man draws on a diverse collection of texts including the 15th century French tune ‘L’homme arméto’, the traditional Muslim call to prayer (Adhan), poetry by Rudyard Kipling and Guy Wilson, and Toge Sankichi’s reflections of the Hiroshima bombing in 1945. The Haydn Mass, also known as the ‘Paukenmesse’ or ‘Timpani mass’ due to the extensive use of the instrument throughout the piece, was composed in 1796, during the Napoleonic Wars

The concert takes place at 8pm on Sunday November 11 in Galway Cathedral.