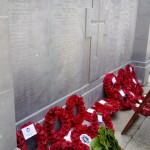 On Sunday 11 November 2017  Glasnevin Trust hosted the official state event to mark Armistice Day, commemorating the end of the First World War. In 2008, Glasnevin Trust and the Commonwealth War Graves Commission set about the task of marking previously unmarked graves in Glasnevin Cemetery of World War I and World War II graves of soldiers, sailors, air men and women. This task is now complete and in addition, 104 headstones or Gallipoli markers have been placed on family graves wherein the remains the fallen lie. In addition, the Trust, along with the Commonwealth War Graves Commission, relocated World War One and World War Two commemorative screen walls from the Prospect Gate area to a more prominent location near Glasnevin’s Mortuary Chapel.

The commemoration was addressed by President-elect Michael D. Higgins, and was attended by representatives of 47 countries. Download the official commemorative booklet for the ceremony here.

Posted in Armistice, Dublin, Events in November 2018, Ireland and the World, Past, State events, World War One and tagged Armistice Day, Glasnevin Cemetery