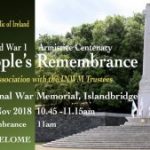 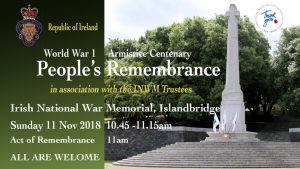 On Sunday 11 November 2018 the Royal British Legion (Republic of Ireland) organised a suite of events in Dublin to commemorate the centenary of the armistice that ended the First World War, on 11am on 11 November 1918.

The Royal British Legion in association with the Trustees of the National War Memorial Gardens, Islandbridge, Dublin 8, hosted the first event to coincide with events in England, Scotland, Wales and Northern Ireland commemorating those soldiers killed in the First World War. The Dublin events focused on the estimated 35,000 Irish men and women from all parts of the island who died in the conflict.   The short ceremony commenced at 10.40am with a parade of the standards of Royal British Legion, regimental, ex-services organisations and commemorative associations. This was followed by a short ecumenical service of remembrance, a two-month silence at 11am, and the laying of official wreaths by public representatives, members of the diplomatic corps, and veterans representatives.

That afternoon, St Patrick’s Cathedral hosted the second event, which is annual service or remembrance for the dead of the war, during which wreaths were laid, including a wreath laid by a representative of the state on behalf of the people of Ireland. The service took place from 3pm to 4.15pm.

The third and final event took place in Grangegormam Military Cemetery, Blackhorse Avenue, Dublin 8, from 3pm to 6pm. This consisted of a ‘Sundown ceremony of light’, inspired by Laurence Binyon’s poem, ‘For the fallen’, which contains the famous line ‘At the going down of the sun and in the morning, we will remember them’. All of the 650-plus Commonwealth war graves in Grangegorman will be illuminated on the evening of 11 November. The majority of the graves were lit during the afternoon prior to the ceremony to become more visible as night fell, and commencing at 4.30pm, a procession of regimental standards was followed by the illumination of the remaining graves by members of Irish youth organisations and veterans. This was followed by a short ecumenical service by the Very Revd Tim Wright, Dean of Kildare Cathedral, and concluded with a two-minute silence. The cemetery closed at 6pm.

Explore Ireland’s memorial records online. Read the Irish Times supplement Too much to hope: Ireland’s experience of the ‘war to end all war’, and explore RTÉ’s online centenary exhibition on Ireland and the Great War.