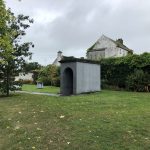 On Sunday November 11 2018 a special memorial event marking the centenary of the armistice that ended the First World War took place in the Memorial Garden, Leighlinbridge, Co. Carlow. The event focused on the hundreds of Carlow men and women who died in the conflict and who are remembered by name on the All-County Memorial in Leighlinbridge. The monument was erected and unveiled in 2002 following research by Martin Nevin, John Kenna and others and at the time was the first  memorial of its kind in Ireland.

The ceremony was coordinated by Carlow County Council Centenary Committee and commenced at 10.50am. It included the raising of the National Flag, a minutes silence, prayers of remembrance, a reading of the names of those who died and an official wreath laying.