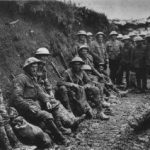 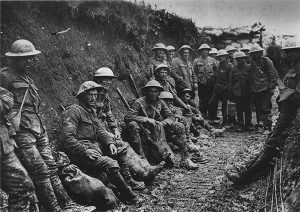 On Sunday 11 November 2018 a civic commemoration took place in Naas, Co. Kildare, to mark the centenary of the 1918 Armistice that ended the First World War, during which a memorial was unveiled on 11 November 2018 in remembrance of those from Co. Kildare who died. Kildare had an extremely strong military presence in the Edwardian era; the regimental depot of the Royal Dublin Fusiliers was in Naas, and other garrisons were located at the Curragh, in Newbridge and in Kildare Town; all of these were involved in training soldiers who fought in the British Army during the war. Two women and 748 men from Co. Kildare lost their lives in the conflict (This figure takes into account those born in Co. Kildare to English, Scottish and Welsh military families). The youngest fatality was 15 years of age while the oldest was 49; the last fatality occurred on 10 November, just a day before the war ended at 11.00 a.m. on 11 November 1918. A unique commemorative booklet containing the names of the Co. Kildare war dead was available free on the day as a prelude to a more comprehensive work to be published in 2019.

A civic memorial to the Kildare war dead was unveiled by the Mayor of Co. Kildare, Cllr. Seán Power at Áras Chill Dara, Devoy Park, Naas, on Sunday, 11 November 2018 at 11am. The event began at 10am. and was followed by a reception at 12pm in the Osprey Hotel.

Learn more about Kildare and the First World War.