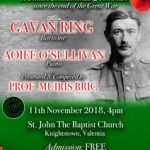 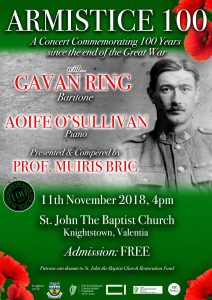 On 11 November 2018 St. John the Baptist Church, Knightstown, Valentia, Co. Kerry, presented a concert entitled ‘Armistice 100’ to mark the centenary of the armistice that officially ended the First World War.

The concert was performed by baritone Gavan Ring, with Aoife O’Sullivan on piano, and will be compéred by Muiris Bric.

The performance took place at 4pm.

Posted in Artistic and Cultural, Events in November 2018, Munster, Past, World War One and tagged Armistice, concert, Valentia