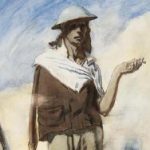 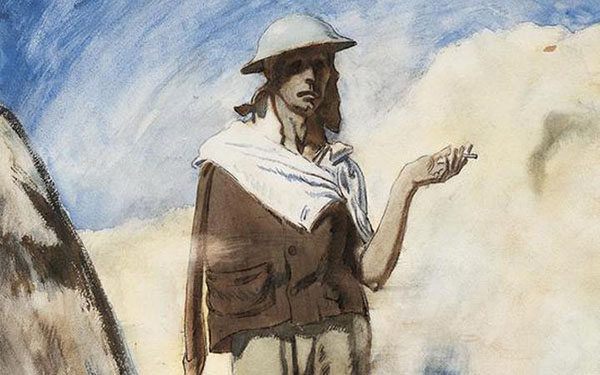 On Saturday 11 November 2017 a new exhibition opened in the National Gallery of Ireland, Merrion Square, Dublin 2, entitled Aftermath: The war landscapes of William Orpen. The Irish painter William Orpen (1878-1931) went to France as an official war artist, serving with the British Army.  Compelled to record what he saw, Orpen’s images show a mutilated earth, reshaped by the mechanics of modern warfare and populated by human remains. Orpen was greatly affected by the experience and in his 1921 memoir ‘An Onlooker in France’ he evoked the terror of the landscape, articulating the permanent impression it left on him. He wrote, ‘I shall never forget my first sight of the Somme battle-fields … there was this endless waste of mud, holes and water … horrible and terrible, but with a noble dignity of its own’. Drawing on Orpen’s text, this exhibition explores a selection of his war landscapes as expressions of the profound human trauma of the war and his own personal struggle to comprehend the destruction it wrought. The exhibition, curated by Donal Maguire, was formed around a series of nine oil paintings on loan from the collection of the Imperial War Museum, London. These are displayed alongside a first edition of Orpen’s publication ‘An Onlooker in France’, as well as letters to his wife Grace Orpen and his companion Evelyn St George.

The exhibition also featured new artwork by the acclaimed Dublin-based artist Garrett Phelan entitled ‘I have no right to be so near, taken from the closing line of Orpen’s poem, A Memory of the Somme, first published in An Onlooker in France. Phelan was invited by the National Gallery of Ireland to respond to William Orpen’s experience of the Somme while serving as an official war artist. With the support of the ESB Centre of the Study of Irish Art, Phelan engaged in extensive research of Orpen’s writings, and in August 2017, he travelled to the Somme, visiting the exact locations where Orpen had painted his aftermath landscapes 100 years earlier. Phelan, who works primarily in the medium of sound, documented his experience of the battle site in field recordings, made at the different locations of Orpen’s paintings. Phelan created two discrete works. A Memory of the Somme, ws a sound work, formed by Phelan around William Orpen’s poem of the same name, while Landscape – La Boisselle Bowl, was a simple ceramic bowl, created by Phelan from clay acquired the Somme battlefield itself.

Post Views: 106
Posted in 2017 events, Artistic and Cultural, Dublin, Events in December 2017, Events in January 2018, Events in November 2017, Exhibitions, Ireland and the World, Past, World War One and tagged National Gallery of Ireland, Orpen