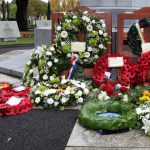 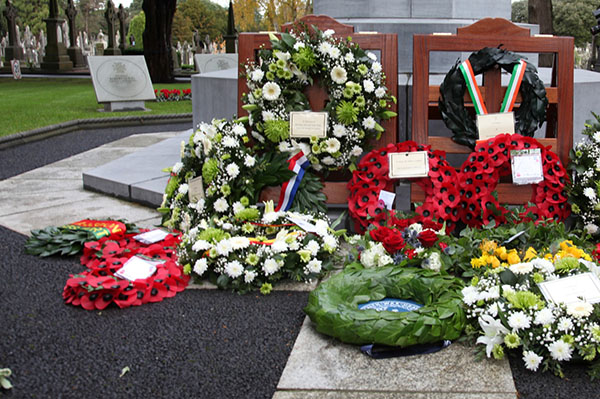 On Saturday 11 November 2017  Glasnevin Trust hosted an event to mark Armistice Day, commemorating the end of the First World War. In 2008, Glasnevin Trust and the Commonwealth War Graves Commission set about the task of marking previously unmarked graves in Glasnevin Cemetery of World War I and World War II graves of soldiers, sailors, air men and women. This task is now complete and in addition, 104 headstones or Gallipoli markers have been placed on family graves wherein the remains the fallen lie. In addition, the Trust, along with the Commonwealth War Graves Commission, relocated World War One and World War Two commemorative screen walls from the Prospect Gate area to a more prominent location near Glasnevin’s Mortuary Chapel.

Glasnevin Trust Chairman, John Green, will lead a wreath-laying ceremony  at the Commonwealth War Graves Commission Commemorative Screen Walls and Cross of Sacrifice, commencing at 11.00am. Wreaths were also laid by the British and French ambassadors, and on behalf of the Lord Mayor of Dublin. The event also included the unveiling of a number of Victoria Cross Commemorative Paving Stones, dedicated to Irish awardees of the Victoria Cross.

From Trinity College Dublin: ‘Fit as fiddles and hard as nails’: Irish soldiers voices from the Great War.

Posted in 2017 events, Dublin, Events in November 2017, Ireland and the World, Past, World War One and tagged Armistice Day, Glasnevin