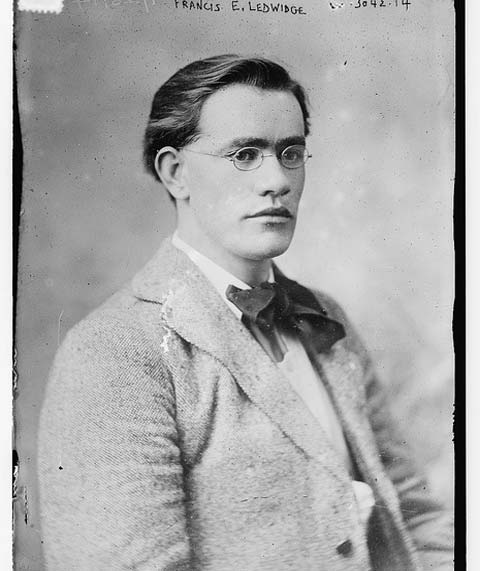 On Saturday 11 November 2017 the the National Library of Ireland and the National Gallery of Ireland presented ‘A broken tree’, a seminar and concert celebrating the life and work of Francis Ledwidge (1887-1917). A native of Slane, Ledwidge was the son of a farm labourer and, having left school at the age of 13, worked in a number of occupations. He was involved in labour politics and was a supporter of Home Rule; he was also a member of the Irish Volunteers. Ledwidge had a burgeoning career as a poet before the war (though two of his three volumes of poems were published posthumously); he enlisted in the 10th (Irish) Division after the outbreak of the First World War, and saw service at Gallipoli. He was killed at the third battle of Ypres on the Western Front on 31 July 1917.

Conceived by the composer Michael Holohan, ‘A broken tree’ consisted of two events: a seminar in the National Library of Ireland from 11am-1pm, and a concert at the National Gallery of Ireland at 3.30pm. These free events were arranged in partnership with the two cultural institutions. The National Library seminar featured presentations on Ledwidge’s life, his poetry, and Welsh war poet Hedd Wyn. Speakers included Lucy Collins (UCD), Nerys Williams (UCD), John Quinn and Susan Connolly, who recited poetry from her new sequence of poems, The Orchard Keeper, exploring the life of Francis Ledwidge.

The afternoon concert at the National Gallery comprised a wide range of classical music settings of Ledwidge’s poetry and featured performances from Anúna and other artists. Louise Martyn, soprano and Annalisa Monticelli, pianist performed Michael Head’s song cycle Over the Rim of the Moon (1919) and the song Desire in Spring by Ivor Gurney (1918), while Michael Holohan, composer and pianist was joined by Hannah O’Brien (soprano) and Rebecca Draisey- Collishaw (oboe and cor anglais) in a performance of his new Ledwidge song cycle The hills are crying  (2017); and Anúna performed a selection of Ledwidge settings by the composer and the choir’s musical director Michael McGlynn. The concert was also linked to the opening of Aftermath: The war landscapes of William Orpen, which also opened on 11 November.