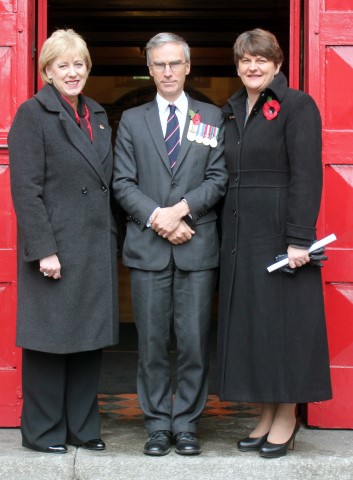 On Tuesday 11 November 2014 a series of events took place in Dublin to mark Armistice Day. These were led by the Minister for Arts, Heritage and the Gaeltacht, Heather Humphreys TD, who was joined by Arlene Foster MLA, Minister of Enterprise, Trade and Investment in the Northern Ireland Executive, and by Dr Andrew Murrison MP, Parliamentary Under Secretary of State at the Northern Ireland Office, for a special service in St Andrews Church, Dawson Street, Dublin 2. Armistice Day, or Remembrance Day, is commemorated on the 11th hour of the 11th day of the 11th month every year, to mark precise moment of the armistice that officially ended the First World War in 1918.

Speaking in advance of the events, Minister Humphreys said ‘I am very pleased that Dr Murrison and Minister Foster were in a position to come to Dublin today for what is the latest in a series of events where we have joined with our British and Northern counterparts to remember the men who lost their lives during World War One. Since becoming Minister in July, I have aimed to make the commemorations as inclusive as possible. It is only right that we should come together to remember our forefathers who fought and died side-by-side’. The events were also attended by the Lord Mayor of Dublin, Cllr. Christy Burke, and the U.S. Ambassador Kevin O’Malley. 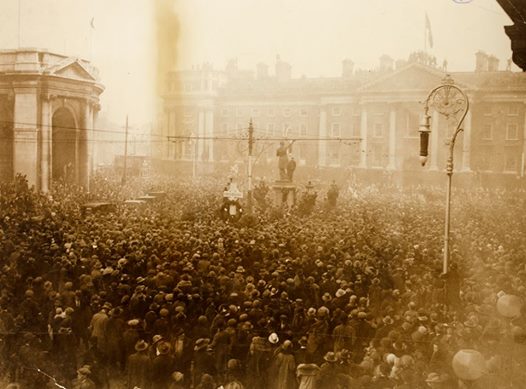 From History Ireland: Brian Hanley on Armistice Day in Dublin in the 1920s and 1930s.

Afterwards, a wreath laying ceremony took place in Glasnevin Cemetery at the Commonwealth War Graves Commission Screen Walls & Cross of Sacrifice at 12.45pm. Amongst those to lay wreath were Minister Humphreys, Dr. Murrisson, and the British Ambassador, Mr Dominick Chilcott. Relatives were also welcome to place Remembrance Crosses in the memorial area. This was then followed by the official opening of the World War One centenary exhibition in Glasnevin’s Prospect Gallery. Speaking prior to the opening, Minister Humphreys remarked that ‘one of the major goals of the Decade of Centenaries programme is to relate history, not just through the narrative of leaders and heroes, but by bringing to light the experiences of the ordinary people living through extraordinary events. The new exhibition at the Glasnevin Museum does just that, through personal artefacts and stories donated by the relatives of those who fought in the war. I would urge anyone who can to come and visit the exhibition over the coming months’. The events concluded with a lecture in the Prospect Gallery by Prof. John Horne (TCD), entitled ‘Ireland and the Great War’.

From the Irish Independent: John Horne on Ireland and the Great War. Explore Ireland’s memorial records online, and learn more about the Glasnevin Trust and the Commonwealth War Graves Commission. Read the Irish Times supplement Too much to hope: Ireland’s experience of the ‘war to end all war’, and explore RTÉ’s online centenary exhibition on Ireland and the Great War. 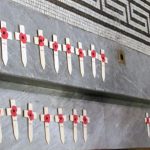 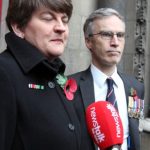 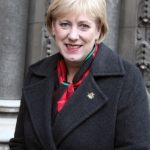 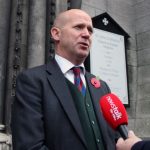 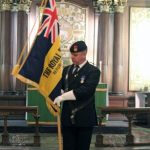 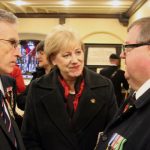 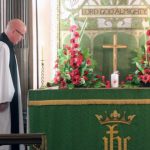 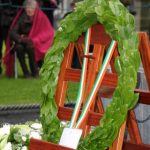