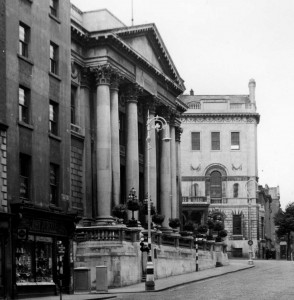 On Tuesday 11 April 2017 Dublin City Council  presented the second of its 2017 lunchtime lecture series on the theme of ‘Remembrance & commemoration: the First World War’. The First World War was at that date the most devastating conflict in world history – never before had so many people been slaughtered and so many countries been involved. The commemoration of this tragic event required careful consideration. This series looks at commemoration in Belgium, Germany, Northern Ireland and the Irish Free State, and is designed to complement the Assembly memorial chairs WW1 exhibit.

The second lecture in the series, entitled ‘”Enough people have died. No one else should be killed in battle!” How Kathe Kollwitz became a pacifist during World War One’, was delivered by Alexandra von den Kneseback and was supported by the Goethe-Institut. It took place in the Council Chamber, City Hall from 1.10 – 1.50pm.