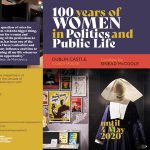 100 Years of Women in Politics and Public Life – a ‘pop-up’ museum in Dublin Castle and a programme of events until May.

This ‘pop-up’ museum was launched in December 2018, by Minister for Culture, Heritage and the Gaeltacht, Josepha Madigan TD on the centenary of the landmark 1918 General Election.  Legislation passed earlier that year allowed women to vote in parliamentary elections for the first time and also to stand as candidates for election to parliament on an equal footing with men.

The exhibition is curated by the historian, Dr Sinéad McCoole for the Department of Culture, Heritage and the Gaeltacht as part of the Decade of Centenaries programme.

The opening of the exhibition coincided with the culmination of Vótáil 100, a programme developed by the Houses of the Oireachtas to commemorate the 100th anniversary of the parliamentary vote for women in Ireland.

While politics is a major feature of the ‘pop-up’, the museum also showcases how Irish society changed throughout the twentieth century and how this gradually opened up opportunities for women to participate in public life in Ireland.

Using clothes, newspapers, election paraphernalia, letters and interactive displays, visitors gain an insight into the issues tackled in each decade of the last century.

Opened originally in the Coach House at Dublin Castle, the exhibition then moved to Istabraq Hall in Limerick City, Donegal County Museum in Letterkenny and Áras an Chontae in Roscommon Town.

The exhibition has now returned to the Coach House at Dublin Castle and is open to visitors from 10am – 5pm daily until Monday 4 May 2020.

As part of the State response to the threat posed by COVID-19 the Coach House of Dublin Castle is currently closed to the public and consequently the ‘pop-up’ cannot be accessed until further notice.

You can, however, access plenty of material on the exhibition on line on https://www.dublincastle.ie/event/100-years-of-women-in-politics-and-public-life/

(All images: Courtesy of Ros Kavanagh for the Department of Culture, Heritage and the Gaeltacht)

A series of events will run to coincide with the exhibition. Further details: Dublin Castle Women in Politics events programme