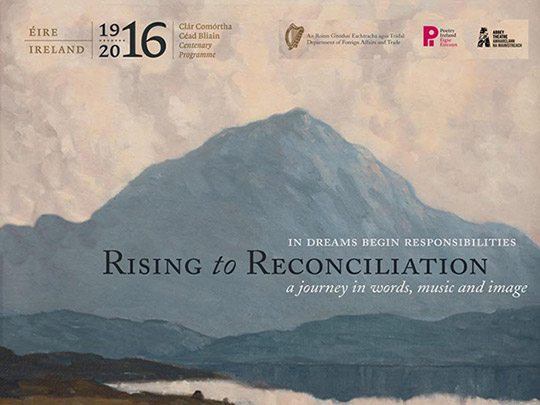 On 10 April 2016, the Department of Foreign Affairs and Trade, together with Poetry Ireland, presented a very special event in Dublin’s Abbey Theatre ‘Rising to Reconciliation; a journey in words, music and images’ to mark the 18th anniversary of the Good Friday Agreement on 10th April 1998. Rising to Reconciliation, part of the Ireland 2016 Centenary Programme, traced the path from the moment of the Easter Rising of 1916 through the complexity and turbulence of the succeeding century and celebrated the moment of hope and reconciliation that the Good Friday Agreement represented.

Rising to Reconciliation is available to view on the RTÉ Player and RTE Player International until May 10.