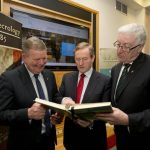 On 10 March 2015 An Taoiseach, Enda Kenny, launched an online 1916 Easter Rising Necrology. The list, researched by the Glasnevin Trust shows 485 men, women and children killed during or as a direct result of the 1916 Rising. Some of the names of those listed are well known, but the majority are the unknown dead of 1916. Glasnevin Trust is encouraging anyone who are related to, or who has information on those listed, to contact them to further expand on these stories in advance of a forthcoming exhibition and programme of commemorative events to mark the centenary of the Rebellion. The names listed will be engraved on a new memorial at Glasnevin Cemetery to be unveiled on the centenary of the Rising.

This major research project has revealed many previously unknown facts. The majority of the dead — 54% — were civilians caught up in the fighting. British Army dead accounted for 26% of those killed while the rebel forces comprised 16% of the total casualties. The remaining percentage is made up of members of the Dublin Metropolitan Police and Royal Irish Constabulary. The numbers of civilians killed each day steadily increased, peaking on the final day of the rebellion, 29 April, when 45 died. This was also the most violent day of the rising overall, in which 78 people lost their lives. 26 April, which saw particularly heavy fighting at Mount Street Bridge, was the worst for the British Army losing 30 men during the fighting throughout the city. The insurgents also suffered their worst casualties on this day with 13 men killed. For the police the worst day was 28 April, when an RIC barracks was attacked at. Ashbourne. The vast majority of those killed were buried at Glasnevin Cemetery in the aftermath of the fighting. The staff of the cemetery struggled to deal with the large numbers of bodies being brought for burial. Despite great strain they succeeded in giving all a dignified burial and recorded their details in our registers.

Speaking at the launch, Mr Kenny said that ‘I want to congratulate Glasnevin Trust for undertaking this important research which will allow us to remember and honour every individual who lost their life during the 1916 Rising. It brings home to us the very real impact that the events of Easter 1916 had on ordinary members of the public as well as those directly involved in the Rising itself. I am particularly pleased that this material is now available as we in Government continue our work to develop a comprehensive and inclusive programme of events to commemorate the Easter Rising.

Click here to explore the 1916 Necrology and to submit information to the project.