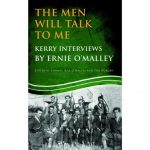 On 10 February 2015 Dr. Tim Horgan gave a lecture in Tralee Library based on his recent book The men will talk to me: Kerry interviews by Ernie O’Malley. The book was an edited collection of interviews with Kerry veterans of the revolutionary period, originally conducted by the Mayo-born IRA commander Ernie O’Malley (1897-1957) in the 1940s and 1950s in the course of research for a projected history of the revolution. O’Malley never completed the project before his death, and his interview notes are retained in UCD Archives. Horgan’s book, co-edited by O’Malley’s son Cormac K.H. O’Malley and published in 2013 by Mercier Press, is the first in an ongoing series that will publish the O’Malley interviews on a county-by-county basis.

The lecture took place at 7.30pm and was held in association with the Kerry Archaeological & Historical Society.

From History Ireland: Gavin Foster’s review of Tim Horgan and Cormac K.H. O’Malley (eds), The men will talk to me: Kerry interviews by Ernie O’Malley.