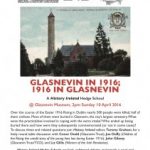 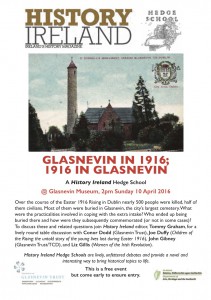 On Sunday 10 April 2016 a History Ireland ‘Hedge School’ debate  took place in Glasnevin Cemetery Museum, Dublin 11, on the subject of ‘Glasnevin in 1916; 1916 in Glasnevin’, dealing with how the cemetery dealt with the aftermath of the Easter Rising, and how 1916 has been commemorated in Glasnevin.

The debate was chaired by History Ireland editor Tommy Graham, and the panelists were Conor Dodd (Glasnevin), Joe Duffy (Children of the revolution), John Gibney (Glasnevin/TCD) and Liz Gillis (Women of the Irish revolution).

Listen back to the Glasnevin ‘Hedge School’ here.