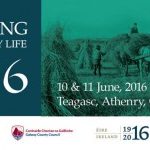 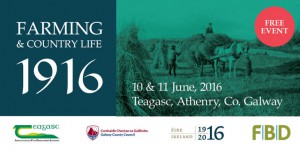 On Friday 10 and Saturday 11 June 2016 Teagasc  presented ‘Farming and Country Life 1916’ at its Mellows Campus, Athenry, Co. Galway. This interactive event recreated rural life of 1916 and reflect on developments over the past century. This event celebrated rural Ireland from 100 years ago and formed part of the official 1916 Rising Commemorations.  Visitors experienced high quality, authentic performances and exhibits that accurately retold the stories of farming and country life and local military activity during 1916, with an appeal to all age groups. The event showcased a significant number of interactive exhibits, dramatic re-enactments, lectures and reconstructions, including a re-enactment of a 1916 National School; popular children’s games from the era; a life size replica of the GPO as the backdrop for a major interactive ‘Ireland 1916’ display; performances from musicians, actors and various artists; demonstrations from craft and artisan producers of production skills from 1916; panel discussions, debates and lectures relating to rural life, farming and the 1916 Rising; a showcase of live farm and farmhouse from the 1916 era; live hurling and football matches in attire of the day; information sessions on agricultural education in 1916; and the food and taste of 1916.

The event ran from 10am until 5pm each day at the Teagasc Mellows Campus, Athenry, Co. Galway. Explore the full programme here.

From the Central Statistics Office: Life in Ireland in 1916.