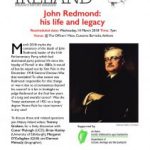 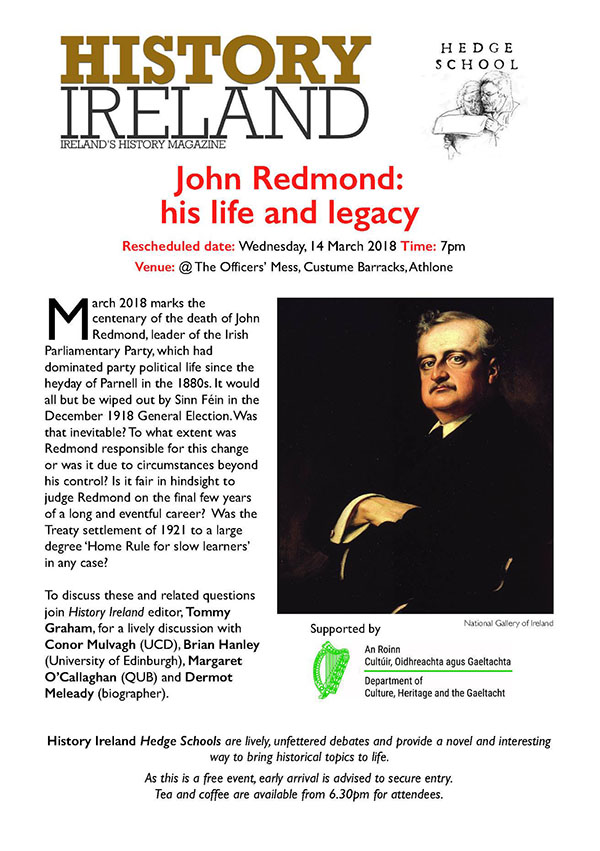 On Wednesday 14 March 2018 a History Ireland ‘Hedge School’ debate took place in Custume Barracks, Athlone, Co. Westmeath, on the subject of ‘John Redmond: his life and legacy’. 6 March 2018 marked the centenary of the death of John Redmond, leader of the Irish Parliamentary Party, which had dominated party political life since the heyday of Parnell in the 1880s. Yet by the end of December 1918 it would be all but wiped out by Sinn Féin in the general election of that year. Was that inevitable? To what extent was Redmond responsible or was it due to circumstances beyond his control? Is it fair in hindsight to judge Redmond on the final few years of a long and eventful career. And was the Treaty settlement of 1921 to a large degree ‘Home Rule for slow learners’ in any case? To discuss these and related questions join History Ireland editor, Tommy Graham, hosted discussion with Conor Mulvagh (UCD), Brian Hanley (Edinburgh), Margaret O’Callaghan (QUB), and Dermot Meleady. This Hedge School was supported by the Department of Culture, Heritage and the Gaeltacht.