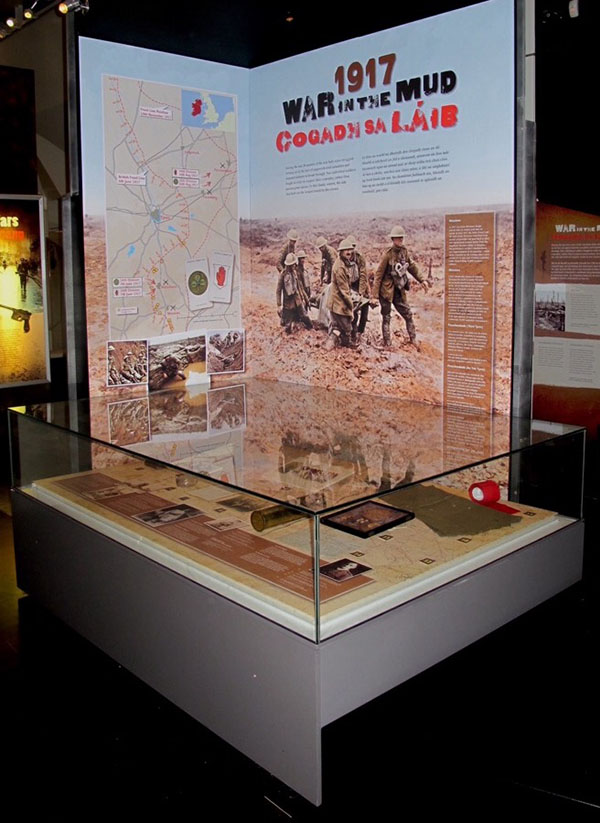 On Thursday 1 June 2017 the National Museum of Ireland – Decorative Arts and Historyopened a new Battle of Messines exhibition in its Decade of Centenaries gallery. The exhibition, entitled ‘War in the mud: the Irish soldier in Flanders, 1917’, surveys what happened to the Irish soldier in 1917 on the Western Front.

In 1917, two Irish Divisions fought side-by-side, in victory and then in defeat. In June 1917, the 36th (Ulster) and 16th (Irish) Divisions benefited from careful preparation and good luck to eject well-entrenched German forces from the important Messines Ridge. The preliminary artillery bombardment was unprecedented in its intensity – three shells exploded on the German lines every second for 12 days. Two months later, the same two divisions suffered terrible casualties in assaulting concrete fortifications amid the mud of an unusually wet autumn. Despite warnings from his officers, the army commander, Irishman Hubert Gough, insisted the attacks go ahead. An observer later wrote: “The two Irish divisions were broken to bits, and their brigadiers called it murder”. Through most of its brief existence the 16th (Irish) Division was commanded by William Hickie of Co Tipperary. He had served in India and Egypt and fought in South Africa in 1899 and later France before being appointed commander of the 16th Division in December 1915. The 16th Division was seen as an Irish nationalist division and Hickie, a Catholic and a supporter of Home Rule, was a popular commander. He tried to encourage his troops by awarding a special certificate to deserving soldiers. In the summer of 1917 two officers that Hickie particularly Redmond and Fr Willie Doyle, were killed and this followed on from the death of the popular Captain Tom Kettle in 1916. He recommended Fr Doyle for the Victoria Cross to be added to the Military Medal that he had already won. By late 1917, after the loss of so many soldiers, there were fewer Irish replacements in the 16th Division and the gaps were filled with English conscripts, while Hickie himself was replaced in February 1918 due to ill health. He eventually retired from the army in 1921 becoming involved in the British Legion and serving as a senator in the Irish Free State Senate. The exhibition contains a range of artefacts, including materisl from the uniform of Fr. Doyle, on loan from the families of thos involved and from In Flanders Fields Musuem, in Ypres.

From Century Ireland: Lar Joye on the Irish soldier in Flanders, 1917.