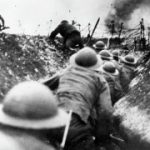 On Friday 1 July 2016 at 7.30pm, Donegal County Museum presented ‘The Battle of the Somme, 1 July 1916 with the 36th Ulster Division’, a cloth model re-enactment by Col. Declan O’Carroll. This formed part of a series of events to commemorate the centenary of the Somme. Using a specially created cloth model, Col. O’Carroll re-enacted the first day of the Battle of the Somme from the perspective of the 36th (Ulster) Division. The re-enactment depicted the topography and terrain features of the battlefield and show the movements of both forces involved from zero hour on 1 July until the end of the day.

This event was being held in the Regional Cultural Centre, Letterkenny.

From History Ireland: Timothy Bowman on the Irish at the Somme.