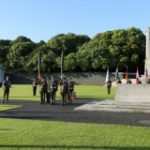 On Friday 1 July a short military ceremony to mark the centenary of the beginning of the Battle of the Somme took place on Friday 1 July 2016 at 7.15 am in the Irish National War Memorial Gardens, Islandbridge, Dublin 8. The offensive on the Somme, in the Picardy region of northern France, formed the British contribution to a wider allied offensive against German forces in 1916. The battles lasted 141 days, during which British forces suffered 420,000 casualties, making it the most costly military action that they participated in during the First World War; the French suffered 220,000 casualties, while the Germans suffered as many as 500,000 casualties.

This 10 minute ceremony was held jointly with the Royal British Legion, and involved a small ceremonial element from the Defence Forces marching from west to east carrying the flags of the 16th (Irish) and 36th (Ulster) Divisions, both of which fought at the Somme. There was also be a piper’s lament. The ceremony was open to the public.

From Century Ireland: Major offensive begins along the Somme.