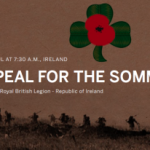 On Friday 1 July 2016 cathedrals and churches of all denominations across the island of Ireland were invited to participate in ‘A peal for the Somme’; an event to mark the centenary of the outbreak of the Battle of the Somme by tolling a funeral bell for 10 minutes on July 1 commencing at 7.30 am, marking 100 years to the minute that officers blew their whistles ordering their men to leave the safety of their trenches and cross ‘no–man’s land’ at the beginning of the Somme offensive. Alternatively, the were encouraged to toll their bells at 11.00 am to coincide with the start of the international ceremonial event at the Thiepval Memorial to the Missing in France.

‘A peal for the Somme’ was coordinated by the Royal British Legion. Lt Col Ken Martin, chairman of the Royal British Legion in the Republic of Ireland, said that ‘the “Peal for the Somme” is intended as a community event to promote remembrance of those of all nations who made the ultimate sacrifice. It is also an important opportunity for an inclusive reflection on the cost of war and the price of peace, and for Ireland to show solidarity with other nations in acknowledging our common losses’.

From Century Ireland: Myles Dungan on the Irish at the Somme.