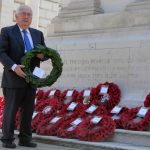 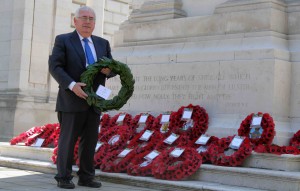 Minister Joe Costello at the Cenotaph at Belfast City Hall

On 1 July 2014 the Minister for Trade and Development, Joe Costello TD, attended a service of commemoration which marked the 98th anniversary of the start of the Battle of the Somme on 1 July 1916. Minister Costello attended at the invitation of Belfast City Council, and laid a wreath at the cenotaph at Belfast City Hall in memory of those who fought at the battle of the Somme.

Minister Costello’s participation in the ceremony follows both his own attendance in 2013, and that of Minister of State Alan Kelly in 2012, which marked the first occasion on which a representative of the Irish government participated in the ceremony. Since 2012, the Taoiseach and the Tánaiste have also participated in Remembrance Sunday ceremonies in Northern Ireland.

Speaking after the event, Minister Costello said that ‘I am honoured to be representing the Irish Government in Belfast today, at the commemoration ceremony of the Battle of the Somme. Through commemorating together, we deepen our understanding of the overlapping histories of all traditions on the island of Ireland. In the current decade of commemorations, we mark historical events that affected all the people of this island, shaping relations on the island for the century which followed. The First World War is a central component of the Irish Government’s commemorative programme, where remembering the totality of the history of the period, with mutual respect and historical accuracy are the key principles underpinning our approach’.

The Minister also used the opportunity of his visit to Belfast to meet with community representatives. 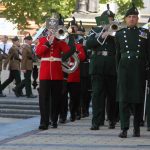 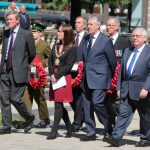 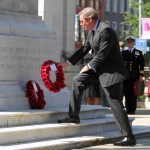 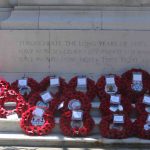 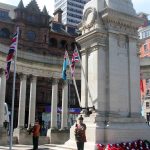 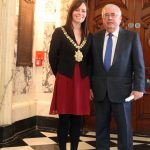