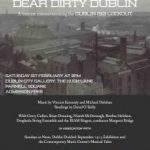 On Saturday 1 February 2014 Dublin City Gallery The Hugh Lane presented Dear Dirty Dublin: the Dublin Lockout, a special concert commemorating the Dublin Lockout 1913. The event took place in Dublin City Gallery The Hugh Lane Gallery,Parnell Square, Dublin 1.Dear Dirty Dublin was an expansion of the ‘Musical Tales’ project which toured Dublin City Libraries in April 2013. It was devised by the Contemporary Music Centre in association with Dublin City Council’s One City One Book initiative. This concert was the final artistic event associated with Dublin Divided: September 1913 exhibition which was curated by Dr Margarita Cappock.

Dear Dirty Dublin was presented in association with Dublin City Council, the Contemporary Music Centre, Sundays at Noon, SIPTU and the Irish Congress of Trade Unions.