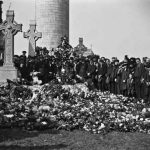 On Saturday 1 August 2015 Glasnevin Cemetery hosted the state ceremony commemorating the centenary of the funeral of the Fenian Jeremiah O’Donovan Rossa (1831-1915). This also marked the beginning of the official centenary programme to commemorate the Easter Rising of 1916.

Born in Rosscarbery, Co. Cork, O’Donovan Rossa became a key member of the Irish Republican Brotherhood (IRB) following its foundation in the 1850s. He was subsequently imprisoned in Britain for republican activities, and in the 1880s helped to organise Fenian bombing attacks in a number of British cities. Having spent periods of his life in the US, he died in New York in 1915: his funeral was used by the reinvigorated IRB to reassert themselves publicly, most famously in the graveside oration delivered by Patrick Pearse. Rossa’s funeral was a public milestone in the planning of the Easter Rising of 1916.

Download the original commemorative programme for the funeral of O’Donovan Rossa, from South Dublin Libraries.

The commemoration took place from 10.15 am onwards in Glasnevin Cemetery, and was attended by President Michael D. Higgins and An Taoiseach Enda Kenny TD. It incorporated a musical recital by St James’ Band (members of which had led the original, along with a re-enactment of Pearse’s oration, a wreath-laying, and a volley of shots. A small number of tickets were made available to members of the public. Watch RTÉ’s full coverage of the ceremony.

From Century Ireland: Enormous crowds attends the funeral of O’Donovan Rossa and ‘Ireland unfree shall never be at peace’.