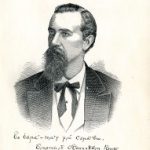 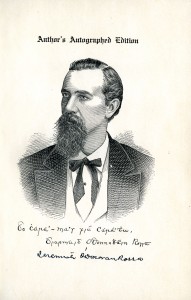 On 1 August 2015 a new exhibition opened in Dublin City Hall marks 100 years since the funeral of Jeremiah O’Donovan Rossa, the Fenian leader and revolutionary who lay in state in City Hall for four days prior to his funeral on 1 August 1915. ‘The Funeral of O’Donovan Rossa’ exhibition contains images, newspaper articles and ephemera from the Dublin City Library & Archive, Pearse Street, Dublin 2.

Speaking prior to the launch Dr Brian Hanley, historian in residence at Dublin City Library and Archive, observed that ‘the O’Donovan Rossa funeral was a key moment in the IRB’s preparations for the Rising, helping turn a dead Fenian into a live inspiration for revolution. On hearing of O’Donovan Rossa’s death Tom Clarke exclaimed to his wife Kathleen “had he chosen a time to die he could not have picked a better time”. The IRB stage-managed what became one of Dublin’s largest political funerals and one of its central effects was to turn Pádraig Pearse, hitherto best known as a cultural writer, into a central figure in republicanism. Pearse’s oration (he had been advised by Clarke to make it as ‘hot as hell’) marked his arrival as a leader.’

Curated by Dublin City Public Libraries as part of Dublin City Council’s Decade of Commemorations Project, the exhibition also includes footage of the funeral from George Morrison’s Mise Eire which shows the statues in City Hall draped in black for the occasion. An audio recording of actor Bryan Murray reading Patrick Pearse’s famous oration at the graveside accompanies the footage.

‘The funeral of O’Donovan Rossa’ runs until the end of October and is open Monday-Friday from 10am to 5.15pm. Admission free.