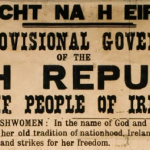 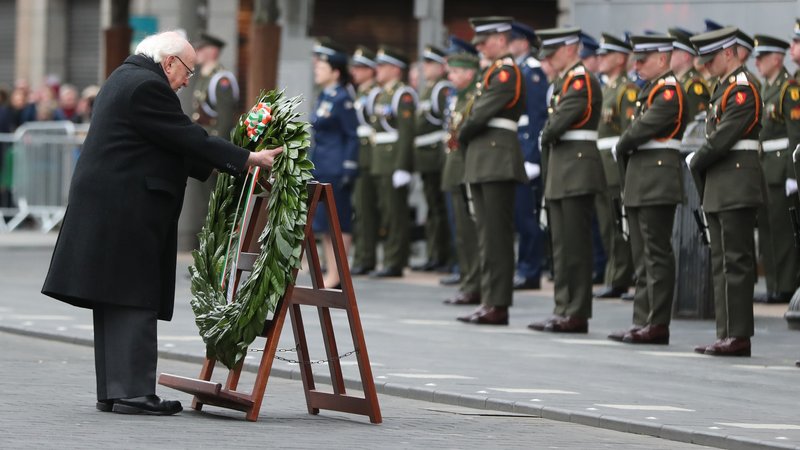 On Easter Sunday, 1 April 2018, the official state ceremonies to mark the 102nd anniversary of the  Easter Rising of 1916 were held in Dublin. In the morning, Minister for Culture, Heritage and the Gaeltacht, Josepha Madigan TD attended a ceremony in Glasnevin Cemetery where she, along with Ms Sarah Tiffin, Deputy Head of Mission at the British Embassy, laid wreaths at the Sigerson Monument in remembrance of those republicans who lost their lives in the Rising. The French Ambassador H.E. Stéphane Crouzat and Brigadier General Howard Berney, Defence Forces GOC 2nd Brigade, also laid wreaths at the grave of Edward Hollywood, and the ceremony closed with the laying of wreathlaying at the grave of Peadar Kearney by his great grandson and by John Green, chairman of Glasnevin Trust.

The main ceremony took place outside the GPO on O’Connell St at noon and was led by the President Michael D. Higgins, An Taoiseach, Leo Varadkar TD, and the Minister of State with responsibility for Defence, Paul Kehoe, TD. Defence Forces Personnel, including a brass band, a pipe band and representatives of the Army, the Air Corps and the Naval Service took part in the ceremony, which  At noon the National Flag was lowered and the 1916 proclamation was read out by Captain Seán McCarthy of the Air Corps. President Higgins laid a wreath to commemorate those who died in 1916, which was followed by a minute’s silence. The ceremony was open to the public, and viewing screens were erected to facilitate onlookers. The ceremony concluded by an Air Corps fly-past.

Explore the official Flickr gallery of images from the event at the GPO.