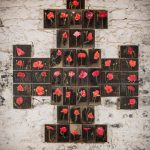 From 1 November to 30 November the exhibition ’45 for valour’ by Trish Taylor Thompson was hosted at Limerick Museum. The exhibition was opened by Cllr. James Collins, Mayor of the City and County of Limerick, on 1 November; the opening also incorporated the launch of Limerick’s military tradition (1691-1922): A brief Introduction by Dr Matthew Potter. To mark the centenary of the ending of the First World War, the exhibition was open to the public for the month of November. A graduate of LSAD, Trish Taylor Thompson’s practice is influenced by the symbolism of botanicals. The exhibition remembers the forty-five soldiers of Irish descent (two of whom were from Limerick) awarded the Victoria Cross for bravery during the First World War.

Learn more about Limerick and the First World War.