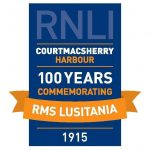 7 May 2015 marks the centenary of the sinking of the Cunard liner Lusitania, which was torpedoed by the German submarine U-20 off the coast of Cork and sank with the loss of 1,198 people. The centenary of the diaster is being commemorated with a wide range of events in Co, Cork. From 1-6 May 2015 Courtmacsherry, Co. Cork, is hosting a number of events and re-enactments to remember those killed in the sinking of the Lusitania, and the rescue efforts by members of the local Royal National Lifeboat Institution (RNLI). The old Royal Navy Watch Tower on the Seven Heads peninsula in Courtmacsherry Bay is the closest landpoint to the Lusitania wreck, and also is home to one of the oldest RNLI lifeboat stations in Ireland, which was instrumental in the aftermath of the disaster.

Minister for Defence Simon Coveney TD officially opened the centenary weekend on Friday 1 May. The main event of the weekend was a pageant at Blind Strand in Courtmacsherry on Sunday 3 May. Produced and directed locally by Angela Veldman O’Donovan, the pageant commenced with narrations detailing the Lusitania’s passage from Liverpool to New York, the torpedo attack by the German U-boat U-20  off the coast of Cork, the sinking of the ship, and the reactions of locals on the main land. Following this, a restored 1902 Ryder lifeboat (similar to the Kezia Gwiltt was used in the original rescue) was launched by a group of volunteers who re-enacted the lifeboat call to service before rowing out to the Lusitania wreck site.  Many of those performing in the pageant are direct descendants of the 1915 Courtmacsherry RNLI Lifeboat crew.

Contemporary German depiction of the attack on the Lusitania

Other events that took place over the May bank holiday weekend included Lusitania talks by local historians at Blind Strand (2pm) and Butlerstown (5pm), and a series of short stories performed by locals in traditional costumes in local bars, focusing on the personal stories of those with connections to Lusitania tragedy. A number of exhibitions also took place in the RNLI Lifeboat Station and Community Hall, showcasing memorabilia and storyboards focusing on the local connections to events of 1915. There was also be a model exhibition at St. John’s Church. The events are continuing on Monday 4 May and Wednesday 6 May, with exhibitions in Lifeboat Station and Community Hall, and a model exhibition in St. John the Evangelist Church of Ireland. Between 2pm and 5pm on these days the Ryder lifeboat is being alongside the pontoon on the pier for public viewing.

Courtmacsherry is one of four coastal communities in Co. Cork that are commemorating the Lusitania centenary with a number of events, entitled Lusitania100 Cork, in association with Cork County Council. For more on Lusitania100 Cork and for a full schedule of events in Cobh, Kinsale, Old Head and Courtmacsherry visit www.visitcorkcounty.com/Lusitania100Cork, @LusitaniaCork on Twitter, or @Lusitania100Cork on Facebook. Click here to download the official programme of events for the centenary of the Lusitania disaster.

Post Views: 89
Posted in 2015 events, Artistic and Cultural, Events in May 2015, Local Authority Events, Munster, Past, World War One